In the poker community, bad beat stories have an approval rating somewhere between head lice and paper cuts. Virtually every poker player rolls his or her eyes when people begin to tell the stories of the worst beats of their lives. It always turns out to be just the run-of-the-mill bad beat every poker player has suffered.

But every now and then, a bad beat tale lives up to the hype and, in some cases, has a happy ending. That was the case recently at the MotorCity Casino in Detroit.

On Tuesday, Jan. 16, Scott from Oxford, Michigan was playing low-limit poker at MotorCity. He held the nearly unbeatable hand of four 3s and was getting action. Scott lost to four queens.

Scott may have lost the pot of a few hundred dollars, but the hand triggered the bad beat jackpot at MotorCity, which had grown to over $1 million. This bad beat netted Scott $427,452.

And he wasn’t the only winner. As the Detroit News reported:

How a bad beat jackpot works

The specifics of a bad beat jackpot vary by casino and turn on the following factors:

In addition to standard rake, rooms with jackpots will take an extra dollar out of each qualifying pot (a pot of $20 or more at MotorCity). That money goes directly into the bad beat jackpot.

At MotorCity, the qualifying hand is four of a kind, with the stipulation that both hole cards and three community cards must be used to make the hand.

Largest in US history but not the largest ever

The jackpot at MotorCity was the largest in US history. Still, it fell short of the record set at the Playground Club in Montreal last year. 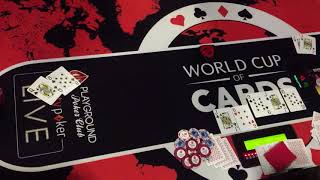 Since everyone loves a bad beat story…

My own bad beat story happened at Foxwoods in the early 2000s. Even though it doesn’t have a happy ending, it’s still a pretty good story by bad beat standards.

The game was Limit Hold’em, and like the beginning of most bad beat stories, I was dealt pocket aces.

But that’s not the bad beat story.

The very next hand I was dealt pocket aces, flopped a set, and lost to someone who made quads on the turn; this time around it was 6s.

This happened 15+ years ago, so my memory is a bit fuzzy on the betting and board cards, but yes, I was dealt pocket aces two hands in a row, made a full house both times, and lost to quads.

But unlike Scott from Oxford, all I have is a story.