The Michigan vs. Michigan State rivalry has not been short on memorable moments.

The two in-state rivals have played a number of intense and historic games over their history, which began in 1898.

Though oddsmakers are predicting their 2020 matchup on Saturday to be a lopsided affair, anything can happen when the Spartans and Wolverines meet.

This list won’t go as far back as the 1800s, but here’s a look at five memorable moments in the Michigan vs. Michigan State rivalry’s recent history.

The Michigan-Michigan State rivalry has led to a lot of controversies over the years, and this 1990 game is still talked about to this day.

Top-ranked Michigan hosted Michigan State in a matchup that looked like it should be one-sided.

Instead, the Spartans pulled off one of their greatest upsets in program history, a 28-27 victory.

The story of the game was Michigan scoring with six seconds to play on an Elvis Grbac TD pass to Derrick Alexander, making the score 28-27.

The Wolverines opted to go for a two-point conversion and the win. On the play, Michigan’s Desmond Howard was tripped by Michigan State’s Eddie Brown, leading to an incomplete pass. No flag was thrown to the disbelief of Howard, giving the Spartans the win.

Michigan did receive an apology letter from the Big Ten for the missed call. I am sure that helped alleviate the frustration.

Another game that sticks in the crawl of Michigan fans came in 2001 where the Wolverines suffered a 26-24 loss in East Lansing.

The unbeaten Wolverines took their first loss of the season on the final play of the game, though many Michigan fans will say the play should never have taken place.

Prior to the final play, MSU quarterback Jeff Smoker scrambled and was stopped at the 1-yard line by Michigan. In a scurry to spike the ball, Smoker managed to stop the clock with 1 second to play. U-M fans argue that the clock operator was quick to stop the clock before the spike. 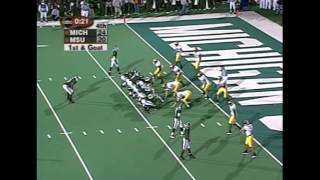 On the final play, Smoker found an open T.J. Duckett in the end zone to give the Spartans the victory.

Duckett finished with 211 rushing yards in the win, and Michigan State was euphoric. Michigan fans still credit “Spartan Bob” as the real MVP for Michigan State.

Things looked bleak for No. 12 Michigan when it trailed MSU 27-10 with nine minutes to play in East Lansing.

Then, Braylon Edwards took over.

Edwards caught a pair of touchdown passes from Chad Henne and Garrett Rivas kicked a short field goal to tie the game at 27-27. MSU kicker Dave Rayner had a chance to give the Spartans the win, but missed a 53-yard field goal attempt as time expired in regulation.

The two traded field goals in the first OT and touchdowns in the second OT. In the third overtime, Edwards caught a 24-yard touchdown pass from Henne. A two-point conversion pass followed to put Michigan up 45-37.

Michigan State couldn’t answer, as a 15-yard penalty on its possession killed any chance for them to respond, giving Michigan the comeback victory.

Edwards finished with 11 receptions for 189 yards while Mike Hart rushed for 224 yards on 33 carries. Deandra Cobb led MSU with 205 rushing yards on 22 carries.

The 2007 rivalry game stands out more for what happened after the game than the game itself.

No. 15 Michigan went to East Lansing and picked up a 28-24 victory over the Spartans, overcoming a 24-14 deficit with under eight minutes to play.

Following the game, Mike Hart uttered the words that would go on to define the rivalry in years to come.

“They (MSU) got excited. Sometimes you get your little brother excited when you’re playing basketball, and you let him get the lead, and then you come back and take it back.”

Mark Dantonio, who was a first-year coach of the Spartans at the time, responded.

Michigan State would go on to win the next four games in the series, and seven of the next eight meetings.

Michigan fans have had their fair share of unlikely losses over the years, including in this rivalry.

Michigan never trailed throughout the contest as Jim Harbaugh looked to be earning his first win against the Spartans in his first season as coach of the Wolverines.

Leading 23-21 with 10 seconds to play, Michigan faced a 4th and 2 at the MSU 48-yard line. The Wolverines needed just a successful punt to run out the clock and secure the victory. 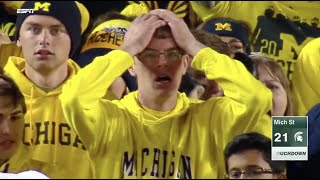 With a swarm of Spartans attempting to block the punt, O’Neill fumbled the ball over to MSU’s Jalen Watts-Jackson, who then ran the ball in behind a wall of blockers for the game-winning score as time expired.

Unfortunately for Watts-Jackson, he fractured his hip at the end of the play and ensuing pile-on celebration.