The 2021 NFL Draft provided plenty of fodder for professional football fans. However, there was plenty to dissect when it comes to the two big college football programs in Michigan.

Michigan had a big draft weekend, while Michigan State saw a lengthy streak come to an end.

Despite a rough 2020 season that saw it go just 2-4, the Michigan Wolverines were mentioned often in the 2021 NFL Draft.

Michigan had eight players selected, tying for fifth-most of any college program in the country.

The eight Wolverines selected were:

One thing that has been commonplace in the NFL Draft for decades is a Michigan State player being selected.

In true rivalry fashion, Michigan found a way to point that out. Defensive assistant Ryan Osborn sent out a retweet highlighting that information with a caption of “Hate to see it…#GoBlue.”

As you’d expect, the state’s social media circles turned into a firestorm.

Michigan State fans were quick to point out that the team without a player drafted defeated Osborn’s Michigan squad in Ann Arbor, 27-24 on Oct. 31.

If anything, it’s worth wondering why Michigan struggled so much with so much pro-level talent. The Wolverines have finished third or worse in the Big Ten East Division in five of Jim Harbaugh’s six seasons.

Michigan State was in the midst of a transition under new coach Mel Tucker. The Spartans were just 2-5 last season and have a lot of roster turnover in recent years.

A third program in the state quietly made an impact in the NFL Draft.

Western Michigan was the only one of Michigan’s three Mid-American Conference schools to get a player selected last weekend.

Taken from the Broncos were:

Eskridge is the next in a strong lineage of draft-worthy Western Michigan receivers. He joins the likes of Greg Jennings and Corey Davis.

Western Michigan was 4-2 during the shortened 2020 season. 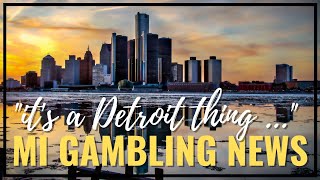 Even through the struggles of 2021, Michigan is still among the top favorites in the Big Ten next season.

DraftKings Sportsbook lists Ohio State as the clear favorite at -110. Michigan joins Penn State as the next in line at +700. Michigan State is among the bigger longshots at +5000.

When it comes to national title odds, Michigan is listed at +15000 by William Hill Sportsbook. Michigan State is at +30000.

Other Michigan draft prospects for 2022 include:

Michigan State is hopeful to start a new draft streak next season. Here’s some hopeful draft prospects for the Spartans: