For most players, Michigan’s online lottery instant win games are something of a time sink. Like Candy Crush or Words With Friends, they’re ways to inexpensively pass some time.

But unlike “free-to-play” games that charge you a few dollars for premium upgrades and extra lives, online lottery games always offer that chance to maybe, just maybe get lucky and hit a big jackpot.

“I looked at my phone so many times to make sure that what I was seeing was right,” she added. “I even took a screenshot and sent it to a few people to make sure I’d won.”

The game she played is called Treasure Bay, and her win was captured in the video below. 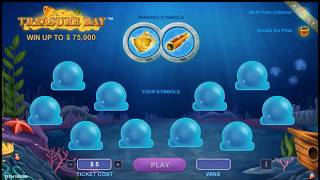 The woman told lottery officials she planned on using it to put a down payment on a house.

“I’m going to be smart with this money and make sure I put it to good use,” she said. “I feel like I’ve got a lot of good karma right now.”

As seen in the woman’s jackpot video, online instant win games are close cousins of online slot machines. As such, they boast a far wider appeal than most traditional lottery products. That’s helped the state expand its lottery player base and attract new, younger customers.

According to the Michigan Lottery, since online games debuted in 2014, more than 750,000 players registered accounts (about eight percent of Michigan’s population). In 2017 alone, lottery players won more than $535 million playing games online.