FireKeepers is a tribal casino located about two hours west of Detroit and about 45 minutes south of Lansing. It’s owned and operated by the Nottawaseppi Huron Band of Potawatomi. The casino opened in 2009 and added a 243-room hotel in 2012.

Gamblit Poker LIVE!  is a hybrid skill-based game that combines slot machine technology with the game mechanics of a traditional live dealer casino table. Its skill-based element comes in the form of the electronic button used to claim cards as they’re dealt.

“Press your button to claim your card! Winner of the Best New Game at Las Vegas’ annual Table Game Competition, Gamblit Poker LIVE!™ is the future of live-dealer table games.

Up to six players compete to make the best three-card hand of poker, but the whole table can win together if enough face cards are dealt! Evoking the spirit of a game show with dual video displays, color changing LED lighting, and immersive sound effects, Gamblit Poker LIVE! puts players right in the action!”

As with most skill-based games, the game mechanics of Gamblit Poker LIVE! can seem a bit confusing without seeing it played. To get a better idea, I recommend watching the short demo of the game below. 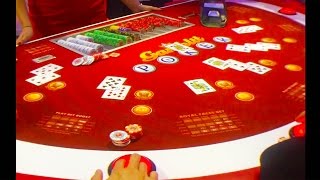 Where else can you find Gamblit games?

Skill-based games are making inroads in the US casino industry. But for now, the games are concentrated in a couple of markets. For Gamblit, that market is Las Vegas, where the company’s games are spreading like wildfire.

You can find Gamblit’s Model G table and TriStation games at no less than 10 Las Vegas casino properties.

The Gamblit Model G™ Table are available at:

In addition to Model G tables, Gamblit TriStation™ games are available at four of these casinos:

Gamblit games are a bit harder to find outside Vegas. Still, the company has inked deals for its Model G™ Table and Gamblit Poker Live!™ Felt Table at the following casino properties and cruise lines: